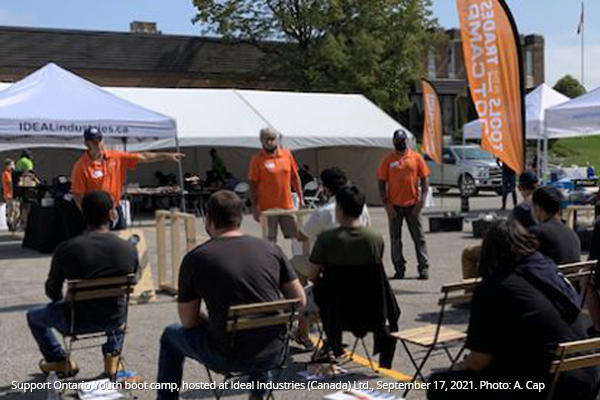 Boot Camp For Youth Is "IDEAL" For Learning About Electrical

September 20, 2021 – One was a chef who hadn’t worked in 18 months. Only one claimed to have some experience with Electrical. All of them were at boot camp to explore the possibility of a career as an electrician. Early last week, I received an email from Sean Bernard—national sales manager with Ideal Industries (Canada) Ltd.—asking whether I was able to drop by their facility in Ajax, Ont., and check out the Boot Camp they were hosting for Support Ontario Youth.

If you’re not familiar with them, SOY’s stated mission is to support apprentices, employers—all stakeholders in the skilled trades industry—by streamlining and simplifying the apprenticeship journey. One of the things they do is host Boot Camps for various skilled trades with partner organizations. As a supporting organization, Ideal (fittingly) hosted a boot camp for Electrical. After masking up, I approached the pavilion, got my badge (and my temperature checked), and immediately met SOY’s program manager, Kevin Graham, who pointed out the various stations to me, and explained what the attendees would be doing.

The youth, meantime, were assembled under the main tent, engaged in a panel discussion about the skilled trades, specifically in construction. The final speaker emphasized the importance of not just the construction sector in general, but of health and safety on the jobsite. The boot camp was limited to 30 attendees, all of which had to sign up beforehand on the SOY website. They each received a leather tool pouch and belt, along with a number of hand tools, valued at $250. (Still waiting for mine, Sean).

Again, of the youth I met, only one said he knew something about electrical. All of the others were exploring possible career options. After the discussion in the main tent, the youth were shown an electrical task (a wired wallbox), and were invited to use their new tools to try wiring their own. They were provided with an instructional booklet, plus they could analyze the finished wallboxes on display.While this was going on, Sean would take small groups into the plant to show them how Ideal’s wire connectors are made. (According to Sean, the plant manufactured some 500 million wire connectors last year.)

When it comes to apprentices, SOY won’t take just anyone. They look for apprentices who are have a positive attitude and a desire to learn; are team players, accountable, determined… you get the idea.But SOY is also looking for employers who are passionate about their trade; knowledgeable and willing to mentor; who are interested in taking on apprentices and would like a trusted resource and support in their corner. If that sounds like you, be sure to visit Support Ontario Youth and get involved.